To Promote the General Welfare

are diametrically opposed to each other:

Health Care vs. Health Insurance.  They are not the same thing.

History of Health Insurance in the US

Wikipedia has a great article here: https://en.wikipedia.org/wiki/Health_insurance_in_the_United_States, and here is my summary:

In the mid-1800s, Accident Insurance was offered to certain employees, mostly in the railroad and steamboat industries. In 1911 we see the first “health insurance” offered to certain employees, but to cover lost wages, NOT medical expenses. Hospitals began offering pre-paid medical insurance plans, but what we would recognize as regular health insurance was a result of WWII and employers’ need to attract and retain good employees.  Since then, we have seen various government-funded programs, including Medicare, Social Security, and, most recently, the Affordable Care Act.  The cost of private health insurance is out of reach for a significant number of people without some sort of assistance.

Before insurance of any kind, you paid your doctor as best you could. If you had to go to the hospital and had no funds, you had to hope that a pauper bed was available.  If not, too bad for you.

Health insurance today is a financial instrument, a contract, an investment, whose sole purpose is to provide a financial return to its investors.  Health insurance does not, indeed cannot, care about the patient.  It covers what it must under law and the contractual agreement between the company and the individual.

Health insurance is not enshrined in history, it is not set in stone, and the laws governing it have and can change over time.  It is not a sacred thing to be untouched.

People need health insurance because health care is so expensive. Most doctors will not even treat you if you do not have health insurance.  I know several people who could not continue with their current doctor if their insurance plan no longer included that doctor, even if they were willing to pay out-of-pocket.  I also know of people who have a very hard time being seen by any doctor if they are private pay.  If a doctor starts to treat you and something goes south, the cost of your visit can go up with the addition of two or more digits to your bill.

Case in point: several years ago someone I know went to get a cortizone injection in his knee.  He had an allergic reaction to it, and ended up staying in the office with 3 nurses, 2 doctors, a crash cart (it turned out not to be necessary), and an IV.  Fortunately, they were able to bring it under control without having to admit him to the hospital.

Suppose in this real-life scenario, this patient didn’t have health insurance, and the doctor agreed to give him the shot for $300 cash.  With what happened, the bill likely went up to $3000.  If he needed to be admitted to the hospital, $30,000.  This is why doctors don’t want to treat you if you don’t have insurance.

The critically ill and injured can go to an emergency room to get immediate treatment, but emergency rooms do not treat for chronic conditions.  And the hospital bill is passed on to the taxpayers.

These words strike terror into the hearts of people who think it is a slippery slope to communism. I honestly don’t know how to alleviate those fears, since I don’t get the correlation.

EXCEPT FOR UNITED STATES, it seems that every (EVERY) modern country in the world (and a few that aren’t modern) has a national health insurance program of some sort.  You pay a tax, show your card when you go to the doctor or hospital, done and done. Nobody has to declare bankruptcy, lose their home and/or all their savings, to be treated for a serious disease or injury.  Everybody pays into it, everybody gets coverage. 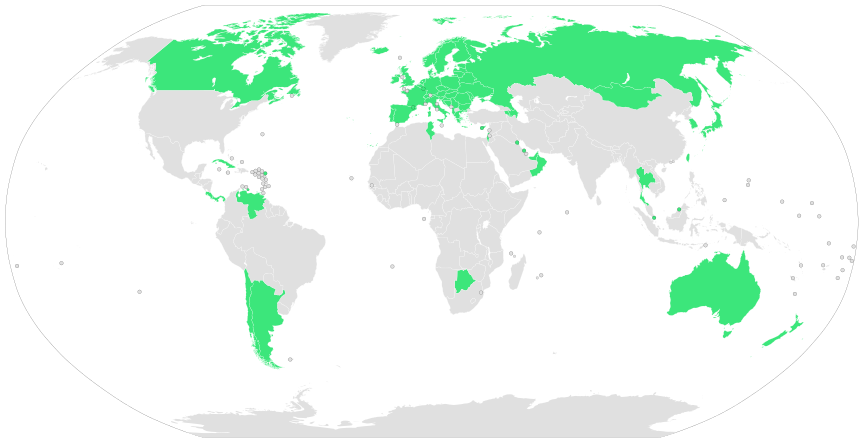 Countries with some sort of national health insurance (courtesy of Wikipedia)

We can argue over funding of national health insurance, limits on coverage, best ways to distribute it, but that it should exist is not a question for most of the world.

Except for the U.S.  Because lots of people in the health insurance industry are making lots and lots of money, and they don’t want that to change.

They also argue that there is “no constitutional right to health insurance,” i.e., if you can’t afford it, not our problem.  That lack of health insurance is giving you “liberty.”  I would argue two things:

Surely getting medical care is a public good and promotes the general welfare.

2. The Ninth Amendment to the Constitution:
The enumeration in the Constitution, of certain rights, shall not be construed to deny or     disparage others retained by the people.

It would seem that just because a right isn’t specifically named in the Constitution doesn’t mean it doesn’t exist.

I believe that people in the U.S. have a right to health care regardless of their ability to pay.  I believe this can be funded with a national tax that would replace what is already spent on premiums, prescriptions, and other health care costs that are already passed on to the tax payers.  No, I’m not an economist, and I get bug-eyed at complex calculations.  But I’ve read the arguments, and I believe the arguments in favor of a national health care system are valid.

Not only would a national health insurance plan promote the general welfare, it is also the right thing to do.

This entry was posted in Uncategorized. Bookmark the permalink.